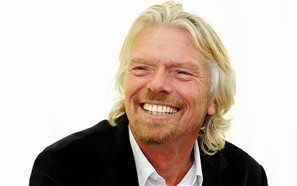 We perhaps should point out that you can only visit these islands if you've been invited, of course. You won't be able to just row up to the shore of Leonardo DiCaprio's Blackadore Caye and ask him to fix you a cocktail. However, if you find yourself in a position to rub shoulders with the rich, the famous and the moderately-talented, here are the remote paradisical locations you should book a ticket for.

10) Musha Cay (below). If you have $37,500 to spare, you can hire Musha Cay from David Copperfield for one day. Yes, that's just for one day. Musha Cay is one of the magician's four islands in the Bahamas. Reports say he paid $50 million for all of them - and the reason he purchased the other three was because they surrounded Musha Cay, thus making Musha Cay more private than virtually every other private island in the world! 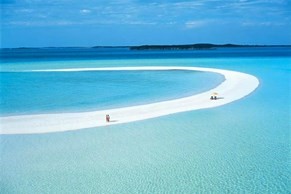 9) Necker Island. David Copperfield's rental price for Musha Cay is a snip compared to Richard Branson's fee of $47,000 a day at his resort on Necker Island with its whiter than white sandy beaches, coral reef and 360 degree views from its ten luxury rooms.

8) Mago Island. Oscar-winning actor and controversy magnet Mel Gibson bought Mago Island in Fiji's Lau Group of islands back in 2005 for a mere $15 million, a purchase which has been opposed by descendants of Mago's native inhabitants. It's also a volcanic island. Say what you want about Mel, he likes a challenge.

7) Rooster Cay (below). Do you remember the end of Trading Places when Eddie Murphy is seen relaxing on a beach on a tropical island? That's pretty much his life now. Only he's 30 years older and his films aren't funny anymore. Yes, Mr Murphy, reportedly one of the highest paid actors in Hollywood, owns Rooster Cay in the Bahamas and he only needed to fork out $15 million for it.

6) Little Halls Pond Cay. What a quaint name for a vast, $3.6 million island in the Bahamas. Johnny Depp supposedly paid this amount for back in 2004 after wrapping up filming on the first Pirates of the Caribbean film. He recently chose to have his wedding here with Bromley Civic Centre registry office coming a close second, apparently.

The Top 5 will be coming shortly. In the meantime, if you're an international jet-setter with a private island, why not check out the rest of the site to see if we can help you with your luggage?

Please note: Our services are also available for those who don't own their own private islands.

No articles were found.