In case it had escaped your attention, it was Chinese New Year last Thursday and the important people at the Liberty Park student residence in Liverpool decided this would be a perfect time to throw a party for their 390 Chinese occupants. So they did. And we went along.

Seven Seas Worldwide is fast becoming the first choice for international Chinese students because we’re affordable, efficient and we have a great team operating in China. Therefore, we thought it would be a good idea to swing by and do a little light promoting. We weren’t trying to shove leaflets in their hands as they were dancing or anything, we just put up a few banners here and there, wore the odd SSW fleece, that kind of thing. And as you can tell from the pictures, the Liberty Park party-goers were very accommodating (pardon the pun). 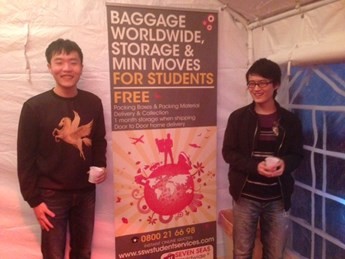 Liberty Park threw a great party, erecting an enormous marquee complete with Chinese lanterns. The music and lighting was very impressive too, and we’re not just saying that because we provided it. Okay, that’s partly the reason we’re saying it. Seven Seas Worldwide also made the night a little more fun with lots of promotional giveaways, ensuring that as many students as possible left wearing a stylish SSW T-shirt (the guy above wanted to hold onto his Pegasus sweater and who can blame him). 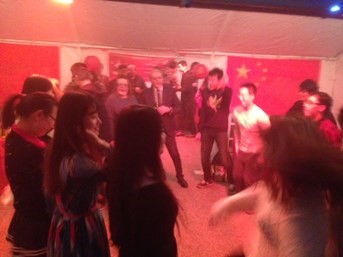 On top of this there was of course a fabulous Chinese buffet laid on together with copious amounts of pizza supplied by those ever reliable pizza-delivery boys and girls at Domino’s Pizza.

The management at Liberty Park hailed the party as a great success with Seven Seas Worldwide doing their bit to make it a memorable occasion.

Let’s hope this is the start of many Seven Seas Worldwide promotional parties to come.

We do hope so. We love a party.

Seven Seas Worldwide are world leaders in both nationwide and global moves, helping thousands of customers each year move or store their personal belongings, excess baggage and household items.