The MoveCube® - A Service that's Wanted Down Under

There are many families in the UK moving to Australia these days. Why? Well, mainly the weather. Let's face it, they do weather better over there. Oh and the seafood is amazing. Plus you can get nicer-looking houses with swimming pools and built-in barbecues. Yes, moving to Australia has got a few things going for it to be sure.

The downside to emigrating to Australia is it has the potential of being one of the most stressful periods of your life. Anyone who has watched BBC One's Wanted Down Under will be aware of the turmoil involved in making such a big decision. There are a lot of key areas to assess before purchasing that one-way ticket to Oz and over the years, Wanted Down Under has put this into sharp focus by following hundreds of families from the moment they start packing their treasured possessions to the day they throw out their last sheet of bubble wrap.

Of all the key areas that need addressing before the big move to Australia, moving all your personal belongings from A to B is perhaps the least attractive. There's no avoiding the fact that it's a big job and requires a lot of time and money as well as plenty of manual labour. Luckily, Seven Seas Worldwide's MoveCube® service provides an ideal opportunity to reduce all three of these factors.

One hazy day in late summer, a young couple from Dartford decided that a MoveCube® would be the answer to their relocation problem. We joined them as they loaded their container - and we weren't the only ones.

The crew from Wanted Down Under were also there, for this couple decided they wanted their adventure to be part of the long-running daytime TV series.

A MoveCube® is a far more convenient alternative to the services of other shipping companies because it's a container inside a trailer. When the driver arrives at your address, he leaves the MoveCube® with you, allowing you to load up for around 4-5 hours. Once you've loaded the container to suit your needs, our driver will return to collect. The next time you see your belongings will be in an Australian MoveCube®, parked outside your new address Down Under. Sounds good doesn't it?

Today's stars of Wanted Down Under chose the Seven Seas Worldwide MoveCube® not only because of its smart approach to moving but also because we provide a personal service. We know how much pressure you're under relocating to Australia and we know that the simplicity of a MoveCube® service goes some way to lightening the load and perhaps creating a chink of light at the end of the tunnel. (That's a metaphor by the way - flying to Australia is better than tunnelling.)

With that in mind, we provide Seven Seas Worldwide boxes (specifically designed for long journeys), packing materials, a trolley for the heavier items and even a couple of traffic cones so you can mark out the space where you'd like the MoveCube® to be parked. Yep, we've thought of everything. Not many shipping companies do. 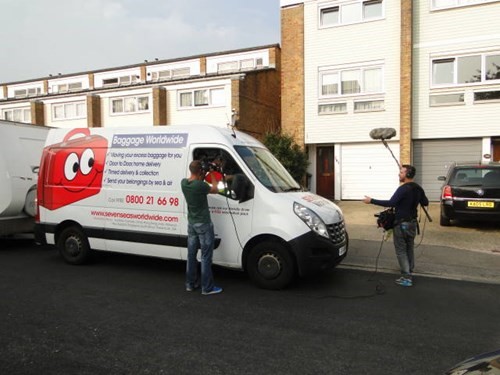 The MoveCube® has already proven very popular in Australia and continues to grow in other countries including China, South Africa, New Zealand and Hong Kong.

As the driver drove away to attend to another family in London, our couple from Dartford began loading the MoveCube®, filling the container with furniture, bicycles and assorted keepsakes, safe in the knowledge they would soon be whisked away safely to Australia.

We wish them well on their adventure and look forward to the episode airing on BBC One!

If you're about to embark on a similar journey, check out our website now and get a free quote to see how much you could save with our perfect solution to household moves.

No articles were found.